4 Reasons Why Argentina is a Great LGBTI+ Destination

Almost a month after Pride Day, we believe that it is always good to remember the reasons why Argentina is an LGBTI+ destination. For this reason, we share this note from Visit Argentina. 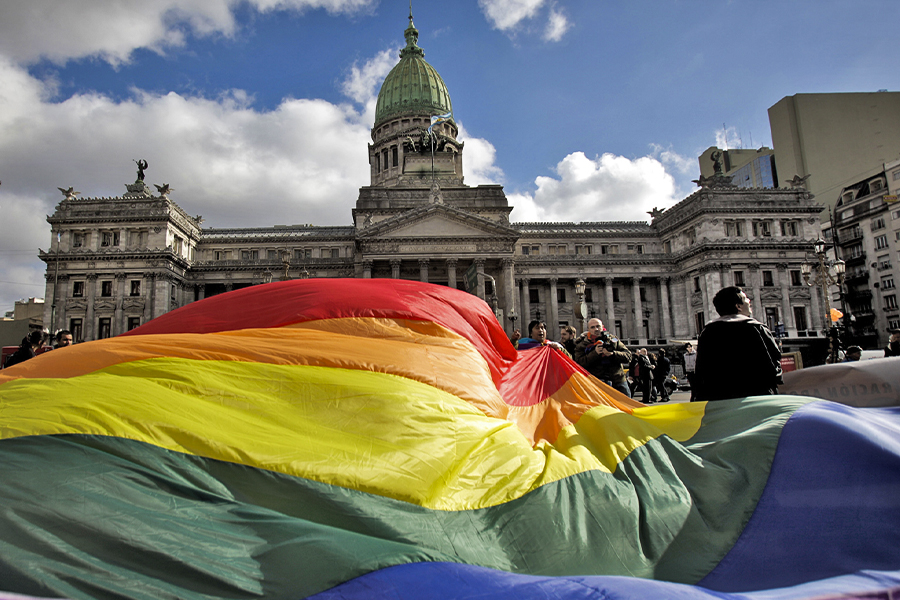 In tourism, security is one of the most important variables to be considered when it comes to deciding on the next trip. But for the LGBTI+ community, it’s not only one more aspect to consider, it is actually a major need. This is why it is no surprise for a country having a high potential for tourism such as Argentina, which invites (and welcomes) LGBTQ+ community travelers with open arms and offers them equal rights to have become one of the favorite traveling destinations, after over a decade of on-going work in both the private and public tourism sectors.

Here are four major reasons to plan a trip to Argentina.

Argentina is part of a progressive group of countries that promote inclusion. We were the first country to enact the same-sex marriage legislation in Latin America and the tenth worldwide. No matter their sex, gender orientation or identity, everybody can get married in the Argentine territory. Together with Canada, it is even one of the few countries worldwide that allows same-sex marriage of non-residents. And this is why LGBTI+ travelers choose to come to Argentina for a few days of enjoyment and, in some cases, to get married and spend their honeymoon.

It’s been more than 10 years since Argentina took that major step aimed at recognizing and raising awareness about the rights of this community. According to the FALGBT, over 20,000 marriages have been celebrated since then.

Argentina embraces the LGBTI+ tourist segment and its legislation, institutions and public policies prove it.

By way of example, various same-sex civil marriage acts have been enacted since December 2002 in different districts in Argentina, such as the City of Buenos Aires; Carlos Paz and Rio Cuarto in Córdoba, or the province of Río Negro. And several civil entities such as the CHA (Comunidad Homosexual Argentina-Homosexual Community of Argentina), created in 1984; the Argentine LGBT Federation (2005) and the Argentine LGBT Chamber of Commerce and Tourism (Ccglar) (2010) have promoted many of the public policies that are currently recognized all over the world in the last decades.

Among the acts they have promoted are the same-sex marriage law (2010) and the gender identity law, which was the first one to be enacted in the region in 2012 and allowed trans (transvestite, transsexual and transgender) people to have their chosen name and gender in their personal IDs.

In Argentina, the Ministries of Labor, Employment and Social Security also promote respect for free gender orientation and identity in work spaces and the Ministry of Women, Genders and Diversity works to protect the rights of people in this community against all forms of inequality and violence.

These and many other public and civil organizations gather the concerns of the LGBTQ+ community and give huge steps in the social field in Argentina and in the region.

Argentina has a clear goal to become 100% egalitarian. This is why its steps forward in this field are celebrated worldwide and it is chosen as a vacations or residence destination.

Lots of cultural, sports, artistic and social proposals to choose from

Buenos Aires is at the top of the most frequently-chosen destinations by the LGBTI+ community in Latin America. And, considering the huge potential of proposals that our country offers for the segment travelers, it makes a lot of sense. Among them is the Milonga Queer, an initiative to rethink tango – the famous Argentinian dance – and put an end to traditional roles when it comes to tango dancing. In fact, the International Tango Festival, which welcomes participants from all over the world, is celebrated every year and the proposal is to stick to the rhythm of milonga, regardless of roles or gender.

In addition, the capital of Argentina has hosted major events several times, such as the Festival Buenos Aires Diversa [Buenos Aires Diversity Fest]. And last year, it was chosen the future venue for the LGBT Games, an international sports and social event which will gather over 5000 visitors from 15 different sports, and offer cultural spaces and conferences about human rights and LGBTQ+ inclusion in the working environment.

Of course the exciting porteño nightlife lures every type of visitor because it offers hundreds of bars and discos, many of which are exclusive for the community. And as far as neighborhoods are concerned, Palermo has become one of their favorite. Why? Simple: it is a must-visit food, art, cultural and commercial center.

All the Argentine territory welcomes the LGBTI+ community so they can enjoy the countless proposals that each of our destinations has and enjoy activities specifically designed for the segment, such as the Vendimia Para Todx [Grape harvest Fest for everyone] in Mendoza, a traditional inclusive festival which offers performances, singing, dancing and lots of fun. Other favorite destinations are Iguazú, El Chaltén, Calafate and Puerto Madryn, with a great deal of proposals that go beyond their already recognized natural attraction.

It is recognized as an LGBTI+ tourism destination worldwide

The Gay Travel Index, prepared by Spartacus Traveller in Germany every year, rates the segment travelers’ most-friendly destinations and Argentina has been among the five top positions since 2020, along with countries such as Canada, Malta, The UK, Spain and Sweden.

In addition, in last year’s International Tourism Fair (FITUR), Argentina stood out as the “2020 Best International LGBT+ destination”, a distinction which is mainly the result of the on-going work done in both the public and private sectors – and our clear commitment to equality. For all these reasons and for the steps we have taken in connection with rights and freedom, all those in the LGBTQ+ community visiting us will feel welcomed and protected in every single corner of Argentina.

You may also find this note on Visit Argentina.

Misiones Invites you to Visit the Fantastic Iguazú Falls